...the complete Nigerian football portal
Subscribe
Confirmed : Super Eagles star will not play for Watford again as option to buy not triggered
Published: May 26, 2022 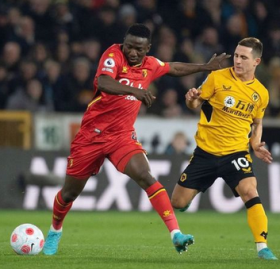 Through their official website, English Premier League club Watford have announced that five first team players have departed the club.

One of the players leaving the Hornets is Nigeria international Oghenekaro Etebo who has returned to his parent club Stoke City.

Watford have opted against triggering the option to buy embedded into Etebo's contract following their relegation from the Premier League.

The hardworking midfielder couldn't do much to prevent Watford from being relegated as he spent five months on the sidelines after suffering a serious quad muscle injury against Newcastle United in September 2021.

Etebo made ten all-competition appearances in 2021-2022, including nine in the Premier League, and logged 487 minutes.

The highlight of his stay at Vicarage Road was helping the club win their opening game of the season against Aston Villa.

The former Warri Wolves star has approximately one year left on his contract with Stoke City, whom he joined from Portuguese setup CD Feirense in the summer of 2018.