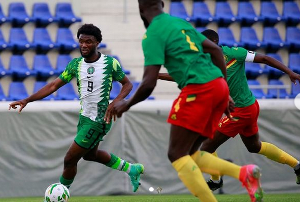 Super Eagles head coach Jose Peseiro now has seventeen players at his disposal as at the time of writing this report, two days before the national team trade tackles with Concacaf powerhouse Mexico in an international friendly in Texas.

Lorient pair Innocent Bonke and Terem Moffi linked up with their international teammates on Thursday, May 26.

The French-based stars were originally not named on the expanded roster earlier announced but were handed late call-ups by the Nigeria Football Federation.

The squad had to be updated with uncertainty surrounding the availability of some of the players invited for the two friendlies in the United States.

Moffi and Bonke are expected to remain with the Super Eagles for their two Africa Cup of Nations qualifying matches with Sierra Leone and Mauritius.

Defensive midfielder Bonke is aiming to make his first-ever appearance for the Super Eagles in a friendly, with his three previous caps earned in competitive fixtures, while Moffi was involved in the double header against Cameroon last summer before making his competitive debut in a 2022 World Cup qualifier vs Cape Verde.