...the complete Nigerian football portal
Subscribe
Uzoho ends rumours of taking a break from Eagles as he joins team in USA; Awaziem in camp
Published: May 27, 2022 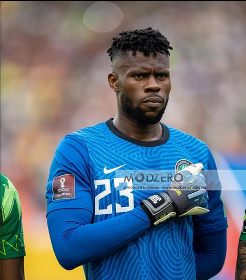 Goalkeeper Francis Uzoho has ended rumours of taking a break from the Super Eagles after he reported for international duty in the United States of America ahead of Nigeria's upcoming internationals in May and June.

There had been speculation in a section of the local media that the Omonoia Nicosia glovesman was not interested in playing for the Super Eagles for the time being in the aftermath of the online abuse he received from fans after the 2022 World Cup playoff against Ghana.

In truth, Uzoho was at fault for Ghana's goal scored by Arsenal star Thomas Partey which ultimately eliminated Nigeria from joining the party in Qatar.

Eleven minutes into the contest at the MKO Abiola Stadium, a shot from  Partey squirmed under the body of Uzoho and went into the net.

Uzoho was not originally included in the Super Eagles squad for the friendlies taking place in the United States but has been handed a late call-up following the withdrawal of Sparta Rotterdam goalkeeper Maduka Okoye.

Super Eagles boss Jose Peseiro put the players through their paces for the first time on American soil on Thursday evening.