...the complete Nigerian football portal
Subscribe
Peseiro reveals what impressed him about Super Eagles players after first workout in USA
Published: May 27, 2022 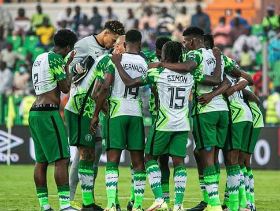 The former Venezuela and Saudi Arabia manager has made it clear that his immediate target is to win the 2023 Africa Cup of Nations.

However, there is some way to go before that target is met as the Super Eagles have to qualify from an Africa Cup of Nations qualifying group containing Sierra Leone, Guinea Bissau and Mauritius.

Peseiro highlighted that he was impressed with the players' enthusiasm and their motivation to train after the long journey to the United States.

Speaking to NFF TV at the end of the workout, Peseiro said : "It's a pleasure starting work today with the training because I started before to practice with national teams.

"And you start to play to win the Africa Cup of Nations, it's the first step.

"I'm happy because these guys came from a long trip but they showed today the enthusiasm, the motivation and they trained with happiness.

"All of them they know we want to win that AFCON, it's holding in 2023 but we must start today to improve our speed and cohesion. The guys were fantastic."

Peseiro is expected to welcome more Super Eagles invitees today before their first match against Mexico at the
AT&T Stadium in Arlington, Texas on Saturday, May 28.