...the complete Nigerian football portal
Subscribe
Rangers to demand record transfer fee for a Nigerian defender from clubs interested in Bassey
Published: May 27, 2022 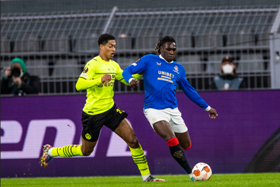 Scottish Premiership giants Rangers will demand a record transfer fee for a Nigerian defender from clubs interested in the signature of Calvin Bassey this summer.

The Daily Mail UK is reporting that the Light Blues have placed a price tag of £25 million (approximately N13.1 billion in Nigerian currency) on Bassey amid interest from Premier League clubs.

Rangers signed the Nigerian for peanuts as he was out of contract at Leicester City, who were entitled to only £230,000 compensation.

Steven Gerrard's Aston Villa and David Moyes' West Ham United are among the clubs interested in the services of the Nigeria international .

2021-2022 was the best season of Bassey's career so far, playing a key role for Rangers in the Premiership, Europa League and Scottish Cup after forcing his way into the first team.

Rangers' most expensive sale is the £11.5m plus add-ons they received for young Scotland right-back Nathan Patterson, meaning Bassey is also in line to become the club's most expensive outbound transfer in history.