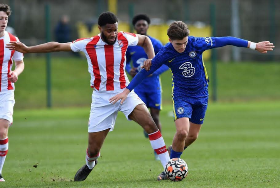 Championship club Stoke City have announced their retained and released list following the conclusion of the 2021-2022 season, with decisions taken on the future of three Nigeria-eligible youngsters.

2019 Golden Eaglets invitee Ifeanyi Udanoh will leave the bet365 Stadium when his contract expires on June 30, 2022.

The central defender signed scholarship forms with the Potters in the summer of 2020 and made fifteen appearances in the U18 Premier League over the course of the 2021-2022 season.

Stoke City are hoping to re-engage Irish-Nigerian starlets Gabriel Adebambo and David Okagbue for next season after their outstanding performance for the youth teams.

A centre-back by trade, Okagbue, 18, has been offered his first professional contract.

The tall and aggressive defender spent a portion of last season on loan at National League North club Chester on work experience.

A contract extension has been offered to 2002-born central midfielder Gabriel Adebambo, who managed only four appearances in the Premier League 2 due to injury.

Nigeria international Oghenekaro Etebo still has a contract with Stoke City until June 30, 2023.