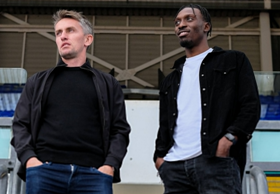 Through a statement on their official website, Ipswich Town have announced that 2011 Flying Eagles invitee Freddie Ladapo will become the Blues' first summer signing when he joins the club following the expiry of his contract at Rotherham United.

Ladapo still has an existing contract with The Millers until June 30, 2022 and will be moving on to pastures new after rejecting a new deal to extend his stay at the AESSEAL New York Stadium.

The 29-year-old comes with a lot of repuation, with 58 career goals in 197 appearances in the Football League, and made his Premier League debut against Manchester United in September 2017.

In his final season at Rotherham United, he won the Papa John's trophy and helped them seal promotion to the second-tier of English football by scoring eleven goals in the League One.

On his curriculum vitae, he counts Southend United, Colchester United, Crystal Palace, Plymouth Argyle, Kidderminster Harriers, Margate among others as his previous clubs.

The 29-year-old frontman, who has penned a three-year deal at Portman Road, will join Town following the expiration of his contract with Rotherham United in June.

Speaking after putting pen to paper, Ladapo told the club's official website : "The chance to come and play for this club, with the history and fanbase it has, is brilliant for me. I am buzzing.

"The manager has plans and goals here, and this feels like the perfect fit for me."

Ladapo has signed a thre-year contract, keeping him at Portman Road until June 30, 2025.