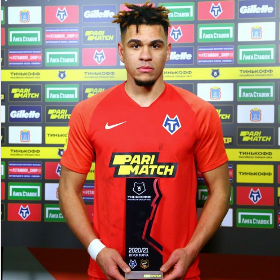 Rubin Kazan announced through social media on Wednesday morning that Onugkha is leaving the team due to the expiration of his loan deal.

Born in Moscow to a Russian mother and Nigerian father, the 25-year-old will return to parent club Vejle ahead of next season.

Forward German Onugkha leaves the team due to the expiration of his loan and returns to the Danish club Vejle 🔙 pic.twitter.com/Q8Q1zl5zhK

Rubin Kazan ended their run of nineteen consecutive seasons in the Russian top-flight after finishing fifteenth in the final standings.

Onugkha was loaned out to Rubin Kazan in September and went on to make twenty five appearances in all competitions and got on the scoresheet on three occasions.

The attacker has worn the colours of FC Zenit Penza, FC Volgar Astrakhan, FC Krasnodar and FC Tambov in the past.