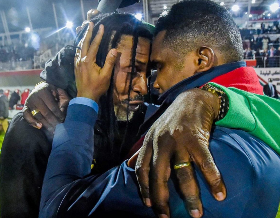 Song was recently appointed to be the Indomitable Lions’ head coach. The former Cameroonian international needs no introduction. He enjoyed an illustrious career as a football player and has the opportunity to do so as a coach.

Song is among the three African players who have featured in four FIFA World Cup tournaments (1994, 1998, 2002, and 2010). The others are his former teammates Jacques Songo’o and Samuel Eto’o. He also won two African Cup of Nations titles as a player in 2000 and 2002 as captain. He has now emerged as one of the leading football coaches in Africa and will be leading his country to Qatar later this year for the FIFA World Cup.

Otto is a famous football star in Ghana and Germany. He played for several German clubs including Dortmund, Mainz, Hannover and Bramfelder SV. His career ended in 2008, after which he began his coaching and scouting career.

So far, so good! He is also slowly showcasing what he can do as a coach to the world. Moreover, his credentials saw the Ghanaian Football Federation entrust him with the task of leading his nation to the World Cup. This achievement makes him the first Ghanaian to qualify for the tournament as a player and coach.

Aliou Cisse’ has already established his name as a top-rated African football coach. He led his country to AFCON glory in February, the first continental title for the country. Cisse’ enjoyed a successful career as a player, having played for PSG and Lille in the French League.

Like the other African coaches, he will also be leading his country to the World Cup this year. It will be an excellent platform for the coach to show what he can do at the most prominent football extravaganza in the world.

Coach Kadri is arguably the least known African football coach. Nonetheless, he has been staking his claim as a top coach, having led his country to World Cup qualification. He also has an excellent international reputation, having managed in Saudi Arabia and Libya. Kadri will also have the chance to prove that he can compete with other leading coaches in the world during the World Cup tournament.