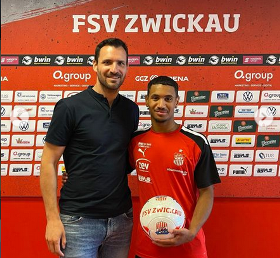 The former Bayern Munich youth teamer has joined FSV Zwickau on a free-transfer and has put pen to paper on a two-year contract until June 30, 2024.

Agbaje had a banner 2021-2022 campaign at Wacker Burghausen, scoring six goals and setting up thirteen others in 37 appearances in the Regionalliga Bayern.

"Noah is a talented and developing player. He was very dangerous offensively in Burghausen last season and, in addition to his goals, made a name for himself as a preparer," FSV sports director Toni Wachsmut said to the club's official website.

"With us, he will be planned for both offensive flanks".

Agbaje is the second new player signed by FSV Zwickau in the off season, after Lukas Krüger.

FSV Zwickau were champions of East Germany in 1950 and won the FDGB-Pokal on three occasions.