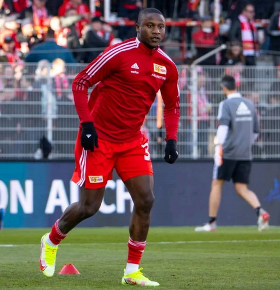 Swedish Allsvenskan side IFK Goteborg are on the brink of announcing the signing of former Nigeria U20 international Suleiman Abdullahi.

Swedish newspaper Expressen broke the news on Wednesday that IFK Gotenborg were in advanced talks to sign the Union Berlin frontman.

Allnigeriasoccer.com can exclusively report that negotiations have been concluded and IFK Goteborg will confirm the capture of the Nigerian in the coming days.

Abdullahi has already put pen to paper on a three-and-a-half-year deal that will keep him at IFK Goteborg until December 31, 2025.

The 25-year-old is making a return to Scandinavian football six years after his departure from Norwegian side Viking Stavanger.

IFK Gotenborg have snapped up Abdullahi as a potential replacement for Sweden youth teamer Oscar Vilhelmsson, who is heavily linked with a move to Slavia Prague this summer.

He played for Gee Lee Academy and El Kanemi Warriors in his homeland before moving abroad in 2015 and has also worn the colours of German outfit Eintracht Braunschweig in the past.