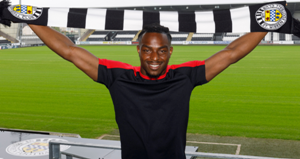 Through their official website, Scottish Premiership side St Mirren have announced the signing of Middlesborough's Anglo-Nigerian striker Toyosi Olusanya.

The 24-year-old has put pen to paper on a two-year deal with St Mirren, and becomes the club's fourth summer acquisition.

Last season, he made three appearances for Middlesborough in the Championship and figured in six matches in the Premier League 2.

Olusanya has departed the Riverside Stadium a year after he was plucked from non-league side Billericay Town.

In his first words as a St Mirren player, Olusanya told the club's official website : "It feels great and I'm happy to have things done early.

"The manager has really sold this place to me and I've met some of the staff already and everyone seems lovely so I can't wait to get started."

Olusanya scored on his Football League debut for AFC Wimbledon at the age of eighteen and previously trialed at Chelsea and Wolverhampton Wanderers.