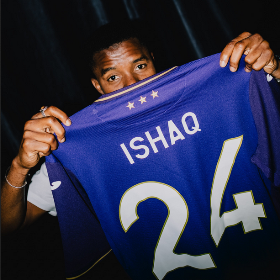 The central midfielder has put pen to paper on a four-year deal with the 34-time Belgian top flight champions.

The 20-year-old departs Norrköping with 61 appearances under his belt, including 54 in the Allsvenskan.

A product of Kaduna based United Academy, Abdulrazak registered nine goal involvements (2 goals, 7 assists) in a two-year association with Norrköping.

Predominantly a central midfielder, he is also capable of playing as a wingback and other positions in midfield.

Commenting on his move to RSC Anderlecht, Abdulrazak told the club's official website : "This is a big step up for me, one that I’m very proud of.

"I want to prove my worth to the team as soon as possible and I am looking forward to meeting my teammates and the fans."

Abdulrazak was unveiled with the number 24 jersey, which was allocated to the now departed Isaac Kiese Thelin last season.