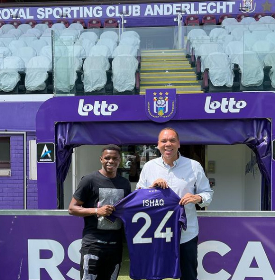 RSC Anderlecht have completed the signing of former Nigeria U17 international Ishaq Abdulrazak on a four-year contract that will keep him at Lotto Park until June 30, 2026.

Allnigeriasoccer.com can report with certainty that Swedish Allsvenskan outfit Norrköping agreed to shred their agreement with the versatile midfielder after accepting a bid of four million euros (N1.77 billion in Nigerian currency).

Anderlecht had been tracking their latest recruit for several months before getting the deal over the line.

In addition to the transfer fee of four million euros, Norrköping will receive an extra 500,000 euros in bonuses if certain conditions are met.

Norrköping negotiated and inserted an onsale clause into the deal taking the 20-year-old to Anderlecht, meaning there is a percentage of transfer fee the Swedish Allvenskan side will pocket in the future if he is sold before the expiration of his contract.

Abdulrazak was courted by a plethora of European clubs but has opted to continue his development at 34-time Belgian top flight champions, Anderlecht.