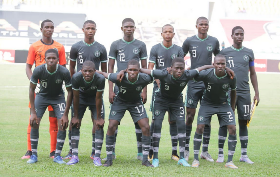 2013 U17 World Cup-winning coach Manu Garba has sent a message to the Golden Eaglets ahead of their semifinal showdown against the Junior Elephants of Ivory Coast at the ongoing WAFU B U17 Championship in Cape Coast, Ghana.

Five-time world champions Nigeria, tipped as the favourites for the title after their impressive performances in the group stage, will qualify for the 2023 U17 AFCON in Algeria if they see off their West African rivals this evening.

The Golden Eaglets will heading into the fixture against Ivory Coast with revenge on their mind after losing to the opponents in the WAFU B U17 Championship showpiece early last year.

Garba, one of the most experienced youth team coaches in the land, has warned the Golden Eaglets not to take their foot off the pedal until the referee calls an end to proceedings.

Nduka Ugbade's side conceded twice in the last quarter of an hour of the game during the group stage, while Ivory Coast have scored a couple of late goals.

"I wish us good luck, a victorious outing and injury free match. Regards to the coaches and players and tell them to exhibit total commitment, confidence and concentration," Garba told reporters.

"They should dominate the game by showing our never say die winning mentality.

"A game is never won until the final whistle is blown. Good luck Nigeria Golden Eaglets.  Nigerians are waiting to see us in the U17 AFCON in Algeria and God willing we shall win."