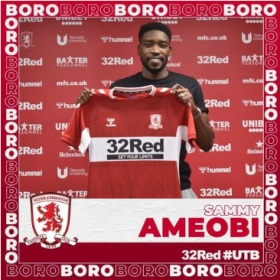 According to Teesside Live, Ameobi has left Middlesbrough, a year after he returned for a second spell with the club.

In his second stint at Boro, the Newcastle United Academy product didn't play a single game nor was he listed in any matchday squad in all competitions due to a knee injury that curtailed his 2021-2022 season.

Had the winger remained at Middlesbrough, he would have found it difficult forcing his way into the starting lineup as manager Chris Wilder prefers to play with wing-backs.

Ameobi's first spell at Boro was during the 2012-2013 season when he was loaned in from Newcastle United, and went on to make nine appearances for the club in the Championship, scoring on his debut vs Cardiff City.

Nigerian strikers Uche Ikpeazu and Chuba Akpom remain on the books of the Riverside Stadium outfit for the time being.