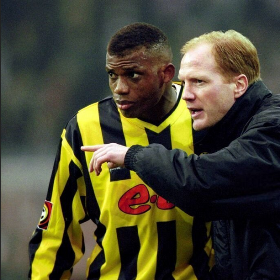 Former Nigeria manager and captain Sunday Oliseh is back in the coaching business, four years after his acrimonious departure from Dutch club Fortuna Sittard.

According to RevierSport via reputable German daily newspaper Süddeutsche Zeitung,  Oliseh will be the new coach at the German Regionalliga West side SV Straelen.

"Sunday Oliseh will be our new coach. In the last 24 hours we have also been able to agree on an employment contract until June 30, 2023," Straelen's President Hermann Tecklenburg told RevierSport.

"We look forward to working together."

An Olympic champion with the original Dream Team in 1996, Oliseh made 139 career appearances in the German Bundesliga for FC Köln, Borussia Dortmund and VfL Bochum, scoring six goals.

Oliseh is expected to be in the SV Straelen dugout when they take on 2. Bundesliga side St Pauli in their first competitive game of the 2022-2023 season - the first round of the DFB Cup on July 30, 2022.

The 1994 Africa Cup of Nations winner also wore the colours of European powerhouses Ajax Amsterdam and Juventus during his illustrious playing career.