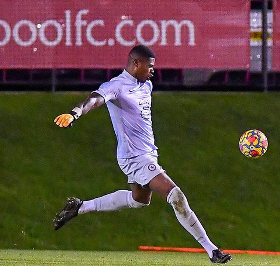 2019 Nigeria U17 invitee Prince Adegoke has a new goalkeeping rival in the battle to be named Chelsea's development squad first choice glovesman for the 2022-2023 season.

Today, Wednesday, the Blues confirmed the capture of Wales U19 international Eddie Beach from Southampton.

Their dates of birth are almost identical as they were born eleven days apart, with the Nigerian born on November 3, 2003 and the Welshman November 14, 2003.

The 18-year-old Nigerian was an unused substitute for Premier League 2 games against Brighton & Hove, Leicester City, Crystal Palace and Arsenal last season, and was the first choice goalkeeper for Chelsea in the prestigious FA Youth Cup.

The two goalkeepers are U19 players but may be fielded for U18 Premier League games as overage players in the forthcoming season.

Adegoke joined Chelsea at U13 level after he was spotted playing for the youth team of  Langley FC.