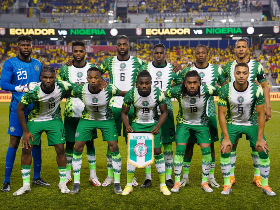 Three-time African champions Nigeria have dropped to 31st in the latest ranking released this morning, down one spot from the ranking announced at the end of March.

After the 2022 World Cup playoff against Ghana, the Super Eagles played four matches, losing by the narrowest of margins to Mexico and Ecuador in friendlies that took place in the United States, before back-to-back wins against Sierra Leone and São Tomé and Príncipe in 2023 Africa Cup of Nations Qualifying.

Nigeria are now the fourth highest ranked country among Confederation of African Football Teams, with Tunisia replacing them in the top three.

Our rivals to book a ticket to the 2023 AFCON in the shape of Sierra Leone, Guinea Bissau and São Tomé and Príncipe are ranked 113th, 115th and 187th respectively.

The next world ranking will be published by the official website of FIFA on August 25, 2022.