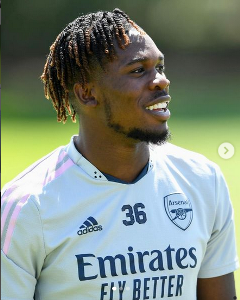 Nigerian-born midfielder Tim Akinola was one of the players retained by Arsenal for the forthcoming season but the north Londoners have not yet disclosed the length of his new contract.

Akinola moved to the Emirates Stadium from Huddersfield Town in August 2020 and the agreement between club and player was supposed to expire at the end of this month.

Allnigeriasoccer.com can exclusively report that the 21-year-old is now tied to Arsenal until June 30, 2024 after the club decided to trigger a two-year extension clause in his previous contract.

He was farmed out on loan to Scottish Premiership outfit Dundee United for the second half of last season, a move that did not work out for both parties after the player suffered a training ground injury, which required surgery.

Akinola was pictured at London Colney this week as Arsenal U21s began their pre-season preparations, fueling speculation that he was back to full fitness.

However, this website can report that he is still undergoing rehabilitation and Arsenal medics have recommended that he should resume full training on Monday, July 18, 2022, meaning he is not expected to travel with the first team for their tour of the United States.

Akinola has been allocated a provisional squad number of 36 for the 2022-2023 season.