...the complete Nigerian football portal
Subscribe
Should the Super Eagles be concerned about the latest drop in FIFA rankings?
Published: June 24, 2022 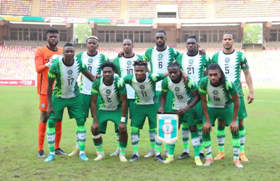 Should the Super Eagles be concerned about the latest drop in FIFA rankings?

Nigeria, the three-time African champions, has lost one spot from the rating announced at the end of March 31st in the current ranking released.

The Super Eagles lost their World Cup playoff to Ghana before playing two friendly games against Mexico and Ecuador which were both losses.

However, the Super Eagles have picked up victories against Sierra Leone including a record-breaking one against Sao Tome and Principe.

Tunisia has replaced Nigeria in the top three of the highest-ranked African teams with the three-time AFCON champions slipping to fourth.

However, should this latest drop in FIFA world ranking be a cause for concern for the Super Eagles?

It is important to note that every top national team laid the groundwork for their success for many years.

Football moves in cycles and every successful team need to put some things in place before achieving its goals.

One such groundwork is the "style of play". For a while now, Nigeria has not been defined with a playing style at all.

Flipping through formations, set-ups, and systems was not beneficial for the team. While it may bring short-term success, it is not a sustainable way of winning.

The top four ranked teams Brazil, Belgium, Argentina, and France including others have a footballing identity which is always the cornerstone regardless of the formation.

Attacking football, creativity, pace, and flair are all associated with the above teams.

Belgium has not won a major trophy in recent times but is second on the FIFA rankings, why is this so? They have a style of play, are competitive and win many games.

So what about Nigeria? Jose Peseiro is new to the Super Eagles having managed just two competitive games and four in total.

In his short tenure, it is obvious that the Portuguese manager has a set style of play he wants to implement in the Super Eagles.

Quick attacking football, two strikers, flexibility, directness, verticality and creativity. These themes are great in national teams and while at the early stages, the Super Eagles will reap a lot if these are totally implemented.

Allnigeriasoccer thinks the Super Eagles should not be concerned about the latest drop in FIFA rankings as the groundwork for future success is being put in place.