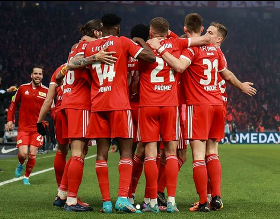 Taiwo Awoniyi's transfer to Nottingham Forest  is in the bag, with the striker signing a five-year deal with the English Premier League newcomers following a successful physical examination.

The transfer fee for the Nigeria international is 20 million euros but not all of it will go to Union Berlin as Liverpool inserted a ten percent sell-on clause into the deal taking him to the Bundesliga club last summer.

Union Berlin were resigned to losing Awoniyi after a banner season that saw him register twenty goals in 43 appearances across all competitions and ending the campaign as the sixth highest goalscorer in the German top flight.

The 24-year-old is returning to the Premier League a year after he was sold by Liverpool for a fee of 6.5 million euros.

Commenting on the departure of the club's record scorer in the Bundesliga, Oliver Ruhnert, Union Berlin's Managing Director for Professional Football admitted that the striker will be sadly missed.

"It was clear that a player like Taiwo will attract the attention of other clubs with his performances," Oliver Ruhnert told Union Berlin's official webpage.

"From a sporting and personal point of view, he is a great loss for our team, which must now be absorbed.

"We wish Taiwo all the best for the future and thank him for his achievements in the shirt of 1. FC Union Berlin."

Awoniyi is the third Nigerian attacker to end his association with Union Berlin this summer, after Anthony Ujah and Suleiman Abdullahi.