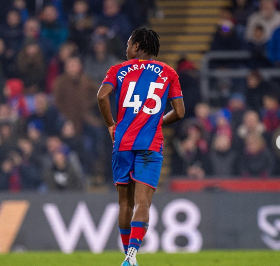 Republic of Ireland U21 international of Nigerian descent Tayo Adaramola could be leaving Crystal Palace on a temporary basis before the close of the summer transfer window.

According to The Athletic UK's Matt Woosnam (subscription required), the left-back is attracting interest from unnamed Championship and League One clubs.

Eagles boss Patrick Vieira has a decision to make, whether to sanction a loan move or keep him around the first team.

Although Adaramola's talent is not in doubt, he lacks first team experience so a loan move would make sense for all the parties.

The 18-year-old is behind Tyrick Mitchell in the pecking order of left-backs, while Joel Ward, Nathaniel Clyne and Nathan Ferguson can play in that position if the need arises.

Adaramola made his professional debut off the bench in an Emirates FA Cup fourth round clash against Hartlepool United in February and started in the following round versus Stoke City.

He has a contract with the Selhurst Park outfit until the end of the 2024-2025 season.