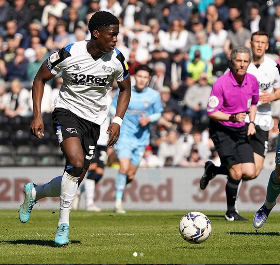 The transfer of Derby County winger Malcolm Ebiowei to Crystal Palace should be officially announced in the coming days after the former Nigeria U17 invitee signed a deal with the Eagles, transfer market guru Fabrizio Romano reported on Sunday morning.

The former Chelsea and Arsenal schoolboy is returning to London after putting pen to paper on a five-year deal that will keep him at Selhurst Park until June 30, 2027 if the parties honour the agreement.

Although Ebiowei is technically a free agent on June 30, Crystal Palace must pay compensation to Derby County because the winger was offered a new contract and is a player under the age of 24.

Prior to agreeing terms with Palace, the 18-year-old rejected advances from Manchester United, clubs in Belgium, France and the Netherlands.

Last season, Ebiowei managed to sneak into the starting lineup of Derby County after impressing for their youth teams and got sixteen games under his belt in the Championship, scoring once and providing two assists.

He trained with the Golden Eaglets class of 2019 in Turkey and Abuja before the World Cup in Brazil three years ago.