...the complete Nigerian football portal
Subscribe
Will La Liga be the best place for Arsenal midfielder Azeez to further his development?
Published: June 26, 2022 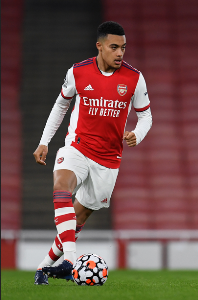 The summer transfer window is an opportunity for youngsters who are already on the fringes of their club's first team to get temporary moves away from the club to further their development and gain valuable playing time and experience which will help them to break into the first team on their return.

A report from Sky Sports has linked Arsenal's Anglo-Spanish-Nigerian Miguel Azeez with a departure from the Emirates Stadium in the summer transfer window.

The report states that three La Liga clubs are interested in signing the Hale End Academy product and one of those clubs is thought to be newly promoted Girona.

However, will La Liga be the best place for Azeez to further his development? Allnigeriasoccer.com takes a look at the playing styles of the player and La Liga.

Azeez has been capped at U16, U17, U18 and U20 levels by England which is a testament to how highly rated he is.

The central midfielder is a control freak who is already mastering the art of dictating the midfield tempo despite his tender years.

The mesmerizing midfielder who returned in January to Arsenal from a loan to Portsmouth is quite tidy and forward-thinking with the ball at his feet but he needs to work more on his positioning to combat counter-attacks effectively.

La Liga has grown quite a fame for being one of the most tactical leagues in Europe. Teams in the La Liga tend to use tactical superiority to win games rather than the hustle and bustle of the Premier League.

La Liga is one of the best places for a young player to learn control, tactics, creativity, vision and ball manipulation.

It is no coincidence that the likes of Xavi Hernandez, Andres Iniesta, Lionel Messi, and Sergio Busquets got their footballing education in La Liga and are master controllers despite not being physical.

Without a doubt, allnigeriasoccer thinks a loan move to La Liga would benefit Azeez greatly and he would come back to Arsenal as a superior player thus making the Spanish league the best place for the next stage of his development.