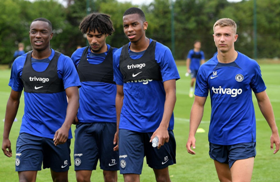 Chelsea Youth account has tweeted that Chelsea Academy pre-season is fully underway and the Nigerian was among the players pictured at the training ground.

The 18-year-old first played for the Chelsea academy at U11 level following a successful trial and after he was spotted by a Chelsea scout whilst playing for grassroots club Coezer FC at a tournament in Spain.

Last season, Abu recorded nineteen appearances for Chelsea U18s team in all competitions, scoring two goals in the league and once in the FA Youth Cup.

Chelsea have confirmed the U21s pre-season schedule, with their first friendly coming up against FC Koln on July 9 before games against Boreham Wood (July 16), Swansea City(July 26) and Bromley (July 30).

Abu and six other players of Nigerian descent have been retained by Chelsea for the new season, the others being Prince Adegoke, Faustino Anjorin, Richard Olise, Bryan Fiabema, Louis Flower and Tudor Mendel-Idowu.