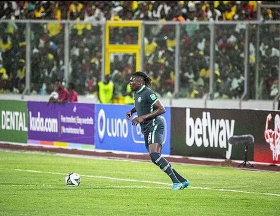 The transfer market is moving quite quickly with clubs around the world making deals to strengthen their squads before preseason training and matches begin.

Steven Gerrard's side has been linked with the signing of Nigerian defender Calvin Bassey from Scottish club Rangers.

The versatile left-back has enjoyed the best season of his career winning the Scottish Cup and getting to the Europa League final.

Bassey has been linked with a move to Aston Villa and it is no surprise with the quality he displayed throughout last season.

However, with the Gers reported to be looking to get around 25 million pounds for the sale of the left-back, rumours have cooled down.

Allnigeriasoccer.com thinks Aston Villa needs to step up their pursuit of the Nigerian with five reasons being outlined.

Steven Gerrard's side played very narrowly last season. Width is highly needed in the modern game as there is little space in the middle to create goalscoring opportunities.

Bassey provides outstanding width and pace and will help the team have a presence on the flanks.

With Matt Targett joining Newcastle United permanently this summer, Lucas Digne is the only senior quality left-back available in the squad.

The interest in Bassey from other teams is low right now. However, things may change as the transfer window goes on.

If other teams step up their pursuit of the Nigerian, Aston Villa would have a huge fight to win.

Selling clubs also like a bidding war as it gives them the opportunity to ramp up the price and make more money.

Bassey offers more variations to any team. He has a wide range of capabilities and is highly flexible such that he can be used in many tactical set-ups without a drop-off in his production.

While being primarily a left-back, the Rangers defender can also slot in as a left-sided centre-back if need be.

This quality gives Gerrard the luxury of switching up his tactics when things are not going the way he wants.

Bassey is a quality player. He is extremely effective with the timing of his passes and has the strength to fend off opponents whilst possessing a good composure when under pressure.

His control and agility when driving the ball forward are top-notch. He is technical, pacy and powerful.

He also possesses a wicked cross that even the most seasoned professional centre-backs need to calculate again before intervening.

Another rare trait Bassey offers is the ability to underlap and overlap effectively. Most full-backs offer overlaps where they move past their winger to stretch the pitch and create more space.

Bassey on the other hand can underlap, thus taking the opposition defensive midfielder inwards and letting his winger get an isolation situation against the opposition full-back.

These qualities are very important in modern football and players who possess them only move for premium prices.