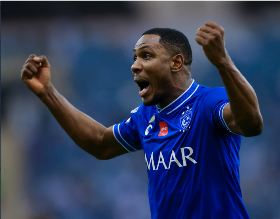 Al Hilal were crowned champions of the Saudi Arabia Professional League for the eighteenth time on Monday night after a 2-1 victory over Al Faisaly at the King Fahd International Stadium.

Nearest challengers Al Ittihad could only draw 0-0 at home to Al Batin, a result that meant Al Hilal finished top of table with a two-point gap.

A cracking shot from inside the area from Odion Ighalo had Al Hilal leading by 1-0 in the seventh minute and in the 64th minute he showed his predatory instinct with a stunning first time finish from the edge of the penalty area to double the advantage.

The visitors pulled one back through Clayson with 20 minutes remaining but Al Hilal were able to hold on to victory.

Ighalo ended the Saudi Pro League season with 24 goals in 31 appearances combined for Al Shabab and Al Hilal - a feat that saw him win the top scorer award for 2021-2022.

Of his 24 goals, thirteen were scored with his right foot, eight with his left foot and three were headers, while he netted twenty two from inside the box and two were outside the area.

One of Asia's most successful clubs, Al Hilal have won the Saudi Pro League in each of the last three seasons.