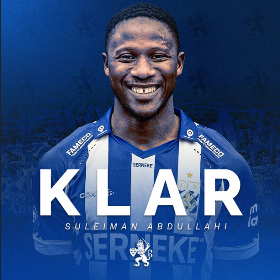 With a statement on their official website, Swedish Allsvenskan club IFK Goteborg have announced the signing of Nigerian attacker Suleiman Abdullahi.

Allnigeriasoccer.com exclusively reported with certainty twelve days ago that the former Flying Eagles striker had already put pen to paper on a three-and-a-half year contract.

IFK Goteborg have now confirmed that Abdullahi has signed a contract until the end of the 2025 Allsvenskan season.

The 25-year-old will complete his move to IFK Goteborg on July 15, the date the transfer window in Sweden officially opens for business.

Abdullahi is returning to Scandinavian football six years after he departed Norwegian outfit Viking to join Eintracht Braunschweig in Germany.

He is joining IFK Goteborg on a free transfer, with his contract at Bundesliga club Union Berlin running out on June 30, 2022.

Commenting on the capture of Abdullahi, manager Mikael Stahre said to the club's official website : "With today's signing, we are leading the competition in the offensive positions.

"At the same time, our promotions of academy players have given us both breadth and increased competition in several places during the spring.

"We have an interesting squad composition to build on during the summer and spring."

IFK Goteborg made a move for Abdullahi after he was extensively scouted by their chief scout Stig Torbjörnsen.