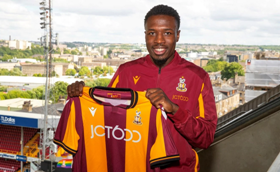 Through their official website, EFL League Two club Bradford City announced on Monday that they have snapped up former Arsenal schoolboy Timi Odusina from Hartlepool United, without disclosing the fee.

The central defender has joined Bradford City on a three-year deal that will keep him at Valley Parade until June 30, 2025.

Bradford City confirmed that they saw off competition from a number of unnamed Football League clubs following the expiry of his contract at Hartlepool United.

Odusina enjoyed a breakout campaign in 2021-2022, making 43 appearances in all competitions for Hartlepool United and was named the club's Young Player of the Year.

During his time as a player of Norwich City, he took in loan spells at AFC Flyde and Hartlepool United to get a taste of first team football.

In his first words as a player of Bradford City, Odusina said : "It feels great to be joining a club of this stature, and is a massive relief for me to finally have this over the line.

"It is not every day you get to work under someone who has achieved what the gaffer has, both as a player and a manager, so it was a no-brainer.

"At this stage of my career, I wanted a home and an environment to nurture, and a three-year contract shows that. When you are given an opportunity like this, you have to take it."

The 22-year-old Odusina resumed pre-season training with his new employers on Tuesday, June 28.