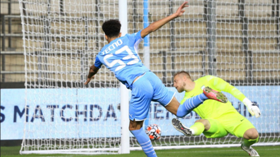 Bayer Leverkusen are in search of a winger to bolster the striking department and are reportedly working on a deal to sign Manchester City's England U19 international of Nigerian descent Samuel Edozie.

The German Bundesliga side have turned their attention to the Anglo-Nigerian starlet after a move for Shakhtar Donetsk star Mykhaylo Mudryk stalled.

The report added that Bayer Leverkusen are not desperate to sign the Anglo-Nigerian, with five wingers already on their payroll.

The 19-year-old has received five call-ups to Manchester City's first team for official matches but only appeared once on the pitch, against Leicester City in last season's Community Shield.

He joined the Etihad outfit from Millwall in the summer of 2019.