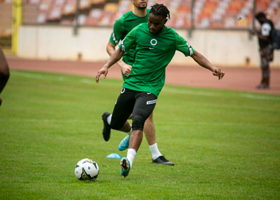 The Nigeria international was declared surplus to requirements in back-to-back seasons, leading to loan spells at English top-flight teams Fulham and Leicester City.

RB Leipzig planned to sell Lookman this summer having inserted a purchase clause into the deal taking him to the King Power Stadium, but Leicester City have not yet triggered the option to buy.

The Charlton Athletic academy product has been given a chance to show his qualities to Tedesco, who took over the managerial reins at RB Leipzig last December.

According to information from RB live, the Italian-German football tactician is expected to start running the rule over Lookman as from Monday when the winger reports for pre-season training.

The possibility of Lookman being retained by RB Leipzig for the new season is helped by the fact that Denmark national teamer Yussuf Poulsen has a torn muscle fiber in his left adductors and is likely to miss the start of the Bundesliga.