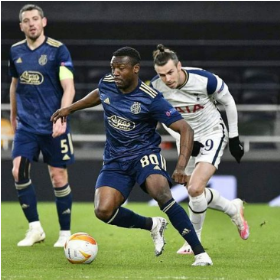 The winger was unveiled as a player of FC Sheriff on Wednesday morning after a successful medial examination.

The length and financial terms of the contract have not been disclosed by the Tiraspol outfit .

The Nigerian has joined Sheriff Tiraspol from Croatian team Dinamo Zagreb, who bought him for a fee of 2.65 million euros from HNK Gorica - the most expensive player sold by Turopoljci in their history.

On his curriculum vitae, the 26-year-old has also worn the colours of Kayseri Erciyesspor, Caykur Rizespor, Sanliurfaspor, NK Lokomotiva Zagreb, Omonia Nicosia and Manisaspor in the past.