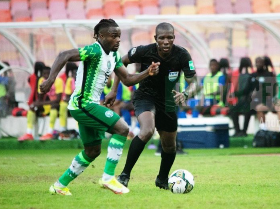 The transfer window is moving on with so many transfers being agreed upon by various clubs around the world.

The 'silly season' is known by that for a reason because of the many twists and turns it brings along, one of which is the curious transfer case of Brazilian winger Raphinha.

Arsenal had been at the forefront for his signature but Chelsea jumped into the driving seat with a higher bid tabled to Leeds which was accepted.

With Raphinha likely to leave for bigger things with Chelsea, Leeds will need a replacement for the flair player.

According to RMC Sport, Leeds is interested in signing Moses Simon as Raphinha's replacement. However, OGC Nice are reportedly in advanced negotiations for the pacy winger.

Allnigeriasoccer.com examines the playing style of both clubs to arrive at a verdict on which club would best fit Simon. First, let us take a look at the Nigerian's playing style.

Simon is a burner. His best attributes as a player are his searing pace, trickery, and ball skills, which he uses to dribble past the opposition's fullback and make crucial passes to his team's forwards, resulting in numerous shots and goal creations.

He also offers good defensive protection for his full-backs and is versatile enough to play there in cases of emergency. However, he needs to improve the quality of his crosses and cutbacks.

Leeds attempt to control possession and burst through the flanks with pace.

Now departed manager Christophe Galtier is an ardent user of the 4-4-2 formation. However new incoming ex-manager Lucien Favre is quite known for his attacking 3-4-2-1 formation.

Leeds is no doubt an attractive option for Simon due to its financial power, glamour and competitiveness. Their playing style suits the Nigerian best.

Nice is going through a managerial change and things may be shaky at first.

However, if a move to Leeds does not materialize, Nice is no doubt a great club for Simon.