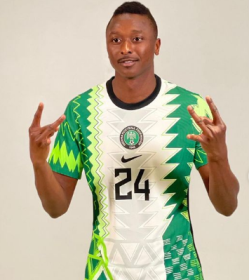 The good form and hard work of Nigerian striker Sadiq Umar have not gone unnoticed as Spanish club Villarreal has been reported to be very interested in signing the 25-year-old.

The lanky Nigerian striker who notched 18 goals and 12 assists in 36 La Liga 2 appearances still has three years to run on his existing contract but his performances have ensured that there is interest in acquiring his services abroad.

It is well documented that Spanish manager Unai Emery favours an intense game-style that is built around pressing, quick one-touch football, creative passing and pace.

The Spanish tactician has always been a flexible coach who tailors his team according to the opposition. However, the basic formation he utilizes is the 4-2-3-1 with the striker acting as a secondary creator and finisher.

Umar on the other hand is superb at holding the ball up and linking up with his teammates, which is why he gets a lot of assists. He is a consistent goalscorer and has good technical abilities in tight spaces.

However, despite a huge frame, his physicality in intense situations is quite average. This makes him a pressing target for opponents who aim to bully him off the ball. For his size, he is also quite weak aerially.

So, If Umar's proposed transfer to Villarreal does go through, will the Nigerian be able to fit into Emery's game-style?

Allnigeriasoccer.com takes a look into Unai Emery's plans and what Umar needs to do to fit in.

This means that he is more likely to tailor his team to suit the occasion rather than trying to impose his game-style.

To play in such games for Emery, the focus, mentality and defensive awareness and tactical discipline need to be top-notch.

However, Sadiq Umar is not such a player. Despite his frame suggesting otherwise, he is a player who excels in an expansive tactical set-up.

Where he is able to showcase his technique, footwork and nose for space to the fullest.

While there is no doubt he can perform for Emery, he will need to brush up on his physical capabilities, mental strength, defensive awareness and tactical discipline if he is to fit perfectly in Unai Emery's game-style.