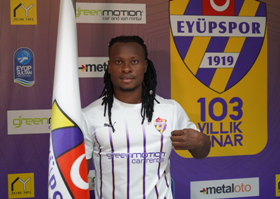 The 25-year-old finished the 2021-2022 campaign as the second highest goalscorer in the Turkish second tier with 16 goals in thirty appearances, an impressive statistic considering that Ankara Keçiörengücü finished 12th in the 19-team table.

On a personal level, the highlight of his goalscoring display last season was bagging a hat-trick in a 3-2 win over Ümraniyespor on matchday 14.

He played for Cameroonian clubs Oxygène de Mfou and Aigle Royal Menoua before transferring to RoPs in Finland in 2017.

Eze was previously on the books of Austrian team Sturm Graz, for whom he netted eight goals in 54 matches across four years.

Since 2019, he has been in Turkey, first representing Adanaspor on loan before shifting to Ankara Keçiörengücü on a permanent deal in the winter of 2021.

Eyüpspor narrowly missed promotion to the Super Lig after they were beaten 2-1 by Istanbulspor in the playoff final on June 2.