...the complete Nigerian football portal
Subscribe
Five reasons Arsenal need to step up their interest in Nigeria-eligible CM after starring at U19 Euro
Published: July 01, 2022 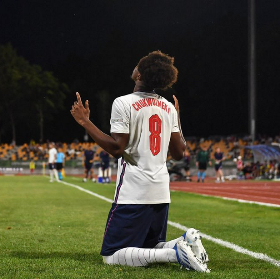 The transfer market is moving quite quickly with clubs around the world making deals to strengthen their various playing squads before preseason training and matches begin.

The Gunners have been very active this summer transfer window than usual. With the signing of Fabio Vieira already confirmed and Gabriel Jesus expected to be confirmed soon, Arsenal have started the summer window with their guns blazing.

The North London giants have been linked with the signing of Nigeria-eligible central midfielder Carney Chukwuemeka from Premier League rivals Aston Villa which is no surprise with the top-level performances the youngster has been producing.

The 18-year-old midfielder has had a great time with the England squad at the U19 Euros, helping them to reach the final of the prestigious competition. However, Arsenal's interest in Chukwuemeka appears to have cooled down in recent days.

Allnigeriasoccer.com believes the Gunners should step up their interest in the midfielder with three reasons outlined.

Chukwuemeka has a year left on his existing contract at Aston Villa and the Gunners can get him at a reduced fee.

Being a homegrown talent with the quality he possesses, Chukwuemeka is a great deal that should not be passed on as he is very likely to command a huge fee in the future when he matures.

The Anglo-Nigerian is a powerful, skillful & creative box-to-box midfielder. He has good physical strength, power, stamina and natural fitness to play as a lone base midfielder or as an advanced number eight in Mikel Arteta's 4-3-3.

One thing that catches the eye is that Chukwuemeka is a press-resistant player. This is a rare trait for a player of his age.

While Chukwuemeka can not be the starting midfielder for the Gunners, his progression is far ahead of his peers who play in his role.

He made 12 Premier League appearances with three of them being starts, whilst notching one assist.

That shows his progression and readiness for the intensity of Premier League games.

Modern football is focused on control in every facet of play. Mikel Arteta is a strong disciple of this philosophy as is evident in his team set-up.

Control is achieved by having more technicians in deeper areas and Chukwuemeka can provide more options for Arteta, especially in Europa games and domestic Cups which will provide him with more playing time.

Listed as 1.85m and 70kg, Chukwuemeka is already achieving a good physical size required to play as a modern base midfielder.

For a player his size, Chukwuemeka had great coordination, agility, work rate and footwork. He also possesses a high level of stamina and agility to make incisive runs on and off the ball from midfield.