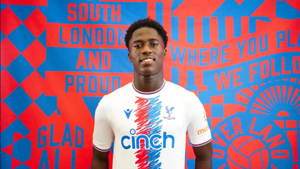 Malcolm Ebiowei completed his move to Premier League side Crystal Palace on Friday, July 1 following the expiry of his contract with Derby County.

The Eagles have pulled off a significant transfer coup to sign the 2019 Golden Eaglets invitee, beating the likes of Manchester United, Tottenham Hotspur and Monaco to his signature.

Following a successful medical late last month, Ebiowei put pen to paper on a five-year contract, keeping him at Selhurst Park until the end of the 2026-2027 season if the two parties honour the agreement.

The former Arsenal and Chelsea schoolboy has admitted that his biggest hero in football is Manchester United superstar Cristiano Ronaldo.

Ebiowei will join manager Patrick Vieira's first team squad for the 2022-2023 season and will compete with Nigeria-eligible wingers Eberechi Eze and Michael Olise for a spot in the starting lineup.