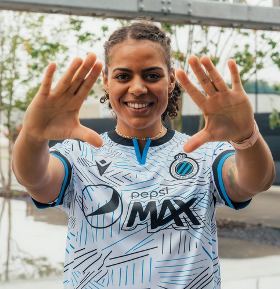 Through their official Instagram account,Club YLA, the women's team of Club Brugge, have announced the signing of Nigeria international Roosa Ariyo.

The length and financial terms of the contract have not been disclosed by the Belgian Women's Super League side.

Born in Finland to a Finnish mother and Nigerian father, Ariyo was on the books of Real Betis for the second half of last season but she was prevented from representing the club in the Primera División Femenina because she had made more than eight appearances for Granadilla Tenerife in the same season.

She began her senior career at Honka, where she played from 2011-2014, and won the Finnish Cup in her final season with the club.

The 28-year-old later moved to Jitex Mölndal, for whom she scored 27 goals in a total of fifty matches played.

After her departure from the Swedish club, she moved to the United States to link up with CC Monroe, scoring an impressive 79 goals in 31 games.

A Nigeria international since June 2021, Ariyo has also worn the colours of University of Bridgeport team and Tikkurilan Palloseura in the past.