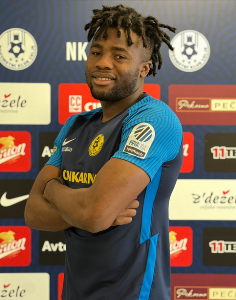 The 20-year-old has inked a three-year deal with NK Celje, thus ending his association with NK Krsko, whom he joined in the January transfer window.

He spent the first half of the 2021-2022 campaign at Austrian Second League club Vorwärts Steyr, where he scored one goal and and bagged an assist in eight league matches.

Prior to Ikwuemesi's move to Europe, he played locally for Enugu based club Giant Brillars.

The promising striker has already started pre-season training with his new employers, scoring once in three friendly matches.

Speaking after the transfer was confirmed, Ikwuemesi told the official website of NK Celje : "Everyone welcomed me so well. I'm thrilled! I feel great in Celje, because my new teammates immediately took me in as their own.

"The excellent chemistry is also felt on the pitch and I'm happy to have signed a contract with the club."

He added : "I am standing on solid ground. I had to take a step back so that now I can take two forwards. I proved in Krško that I can do it and now I am very motivated to show it in Celje as well.

"I am self-confident and convinced that we can fulfill the club's high goals".

Ikwuemesi is the fifth player signed by NK Celje in the summer transfer window.