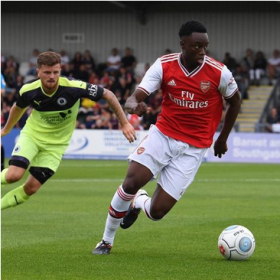 Allnigeriasoccer.com can exclusively report with certainty the Gunners are planning to loan or offload their Hale End Academy graduate before the close of the summer transfer window.

The box-to-box midfielder has been offered to a couple of unnamed League One and League Two teams.

Olayinka has not been training with Arsenal's first team since the start of pre-season preparations and it's a clear indication that he is not in the plans of manager Mikel Arteta for the forthcoming season.

He is no longer eligible to be registered on Arsenal's Premier League roster as an U21 player and the same applies to the UEFA Europa League.

For the 2022-2023 season, Olayinka is not age eligible for the Premier League 2 but can be brought into the development squad as an overage player as the rules currently stand.

Olayinka has been on the books of Arsenal since the age of seven and signed his first professional contract in January 2019.