Official : Super Eagles striker suspends his contract with CSKA Moscow ahead of transfer 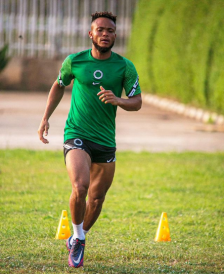 Through a statement on their official website, CSKA Moscow have informed that Chidera Ejuke and Iceland international midfielder Arnor Sigurdsson have suspended their contracts with the Russian Premier League club.

The Army Men confirmed that the Nigeria international striker will play for another club in the 2022-2023 season.

Fifa has ruled that foreign footballers and coaching staff from the Russian Premier League will be allowed to unilaterally suspend their contracts at Russian clubs until June 30, 2023.

Allnigeriasoccer.com can confirm that German Bundesliga outfit Hertha Berlin are working on a deal to sign Ejuke for the forthcoming season but the Nigerian has yet to put pen to paper on the proposed contract.

"PFC CSKA regrets the players' decision, which was taken despite club's effort and their contract duties," CSKA said in a press release.

"As was announced earlier, PFC CSKA plans to fill in lawsuits to defend its interests against FIFA's decision, which we consider discriminatory and contrary to the statutes of that organisation."

Former former Vålerenga and Heerenveen star Ejuke arrived at CSKA Moscow in August 2020, and has appeared in 65 official matches for the Muscovites, registering 10 goals and 8 assists.

The 24-year-old has two years left on his contract with the 13-time Soviet Top League / Russian Premier League champions.