...the complete Nigerian football portal
Subscribe
Celtic or Rangers? Analysis of which club would be a great fit for Super Eagles striker
Published: July 04, 2022 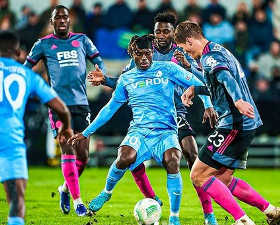 Nigerian players are getting into the transfer window merry-go-round with the likes of Joe Aribo being linked with Southampton and Chidera Ejuke with Hertha Berlin.

Allnigeriasoccer.com recently reported that Nigerian striker Stephen Odey was being tracked by the two Scottish Premiership powerhouses Celtic and Rangers.

Randers' Nigeria international Odey also told Danish media that he is open to joining either of the two giant clubs.

Although Celtic and Rangers are not yet reported to have firmed up their interest in the former Mountain of Fire and Miracles Football sensation by making official bids to Randers, allnigeriasoccer.com will be making an analysis of which club would be a great fit for the striker.

One of Odey's strongest points is his movement. He loves to play on the shoulders of the last man with his split movements between the defenders one of his trademark moves.

Odey is quite dangerous with his technique, pace and finishing making him a class player.

Odey put himself in the shop window on the back of his rich vein of form for Randers last season. He had a hand in fifteen goals (13 goals, 2 assists) in 32 all-competition appearances.

Since he took over at Celtic, he has largely tried to play a 4-3-3 formation, using very wide wingers in the front line.

The objective is to create space in the inside channels for a full-back or central midfielder to exploit.

His wide forwards came off the flanks and look to get on the ball between the lines. There has been a general improvement from the midfield with their movements and in forward passing by the central defenders who are now more comfortable under pressure.

Giovanni van Bronckhorst's Rangers usually show up with the 4-3-3 for the big games with emphasis being laid on right-sided rotations, direct play down the left and creating a numerical advantage in the inside channels.

However, Van Bronckhorst's side generally do not apply pressure to the ball high up the pitch. They are mostly reactive without possession and let the opposition dictate the direction of the attack easily until they drop into a low-block.

Odey is a player that thrives on chaos. This is achieved by teams that generally press high and makes use of the half-spaces very well. Celtic is very good at this at the moment.

However, if a transfer to Celtic does not materialize, Rangers is also a very good option.