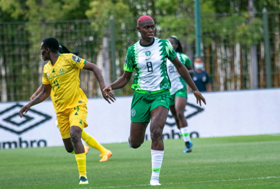 The Super Falcons of Nigeria began the defence of their Women’s Africa Cup of Nations in Morocco on Monday evening on a losing note after a 2-1 defeat to South Africa.

Allnigeriasoccer.com here presents the five observations from the match.

The Super Falcons were sloppy in their passes. They lost the ball at dangerous positions and were leggy at the back against a younger South African girls.

Asisat Oshoala was most times left to chase lost causes as she was isolated upfront. The early injury she copped admittedly slowed her down and was eventually subbed off in the second half.

Improved Second Half By Bayana Bayana

The South Africans started slowly but grew into the game and when the momentum was built, they hardly let the Super Falcons into their half.

Francisca Ordega and Uchenna Kanu were double second half substitutes whose contributions were telling as they brought some urgency that led to Ajibade's goal.

It shows that the head coach Randy Waldrum should have made the changes a bit earlier.

Nigerian national teams have always been motivated by the presence of the Nigeria Football and Other Sports Supporters Club at major tournaments.

The crowd at the ongoing WAFCON have been poor and discouraging.

It seemed as if this was a glorified friendly match.