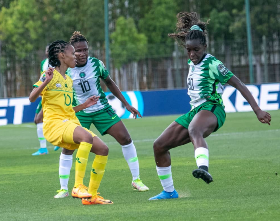 Defending champions Nigeria were defeated by South Africa in the first Group C game of the Women's Africa Cup of Nations in Morocco on Monday evening by a 2-1 scoreline.

It was a tight game and there was nothing to separate the two teams in the first half as it ended in a goalless draw.

However, South Africa had good statistics and performed better than the Super Falcons in the first half with the Bayana Bayana having 59.6% of the ball possession.

Allnigeriasoccer.com provides the ratings of the players.

Tochukwu Oluehi: Very average performance between the sticks. Didn't command her box very well, failed to claim too many crosses and could have caught a few high balls instead of punching. Average performance almost turned worse with a red card scare in the 80th minute after a late tackle on an opponent when she attempted to sweep. 4/10

Michelle Alozie: Energetic but had little end product. Tried to make something happen but lacked a lot of quality in attacking positions. Booked in the 44th minute. 6.5/10

Onome Ebi: Rock solid first half. Didn't put a foot wrong. Average second half as a lack of communication and good positioning left Alozie in a one-on-two situation which led to the second goal. 6.5/10

Ashleigh Plumptre : Held it together at times with her last-ditch tackles and blocks. Was a solid wall at times but got spun in the 61st minute which lead to South Africa's opener. Partly at fault for the second goal too after a lack of organization from her and Ebi. 5.5/10

Osinachi Ohale: Got forward many times but failed to properly utilize the space she was afforded. Was badly out of position for South Africa's opening goal. 6/10

Halimatu Ayinde: Industrious but lacked the technical level to properly stamp authority at the base of midfield. 6/10

Rita Chikwelu: Also failed to affect the game from midfield. Little control and fizzed long passes towards the forwards on several occasions when there were other options to recycle and redistribute possession. 5/10

Rasheedat Ajibade: Average first half but grew into the game in the second. Great ideas but execution was poor in some instances.  Grabbed a goal back with a close-range finish in the 92nd minute. 7/10

Asisat Oshoala: Got an injury scare early in the game but was able to play for 81 minutes before being substituted. Really starved of service. Made good use of the little she got but her effort was well saved by South Africa's goalkeeper. Showed good movement but was isolated up top and left to chase too many long balls. 5/10

Toni Payne: Good combinational play but nowhere as effective in the final third as she should be. 5.5/10

Ifeoma Onumonu: Full of running but dropped too deep many times due to a chronic lack of adequate service. Left to chase scraps which was only going to end in one way, poor performance. 6/10

Vivian Ikechukwu: Replaced Chikwelu in the 70th minute and brought more running to the show. Didn't affect the game much but showed promise. 5/10

Uchenna Kanu: Came on for Onumonu in the 81st minute to add fresh legs to the attack. Couldn't do much. 5/10

Francisca Ordega: Tried to drive the ball from deep after her introduction for Oshoala in the 81st minute. Could have affected the game more if she had more time 5.5/10