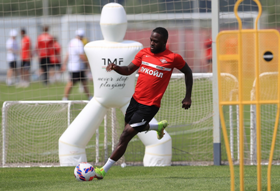 About two weeks ago, the Red and Whites officially disclosed that the former Chelsea wingback did not arrive at the team's training camp at the appointed time, adding that his contract has not been suspended.

Spartak Moscow have clarified that Moses missed the training camp in Tarasovka for personal reasons.

It was previously suggested that Moses's wife blocked him from traveling to link up with Spartak Moscow at their training camp.

Spartak Moscow are currently preparing for their first competitive game of the new season, the OLIMPBET Russian Super Cup match against Zenit in St. Petersburg on Saturday, July 9, and it remains to be seen whether or not the 2013 Africa Cup of Nations winner will be involved as he is lagging behind in preparations.

The Crystal Palace academy product initially joined Spartak Moscow on loan in October 2020 and the following season he was signed on a permanent basis from Chelsea.

Moses has totaled 53 appearances for Spartak, registering seven goals and nine assists and helped the club to win the Russian Cup in 2021-2022.