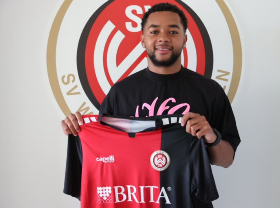 The 21-year-old arrives at SV Wehen Wiesbaden from Viktoria Berlin and has signd a contract that runs until June 30, 2024.

The German-Nigerian defender played for the youth teams of Hamburg and Schalke 04 before switching to Viktoria Berlin in January 2022.

He is credited with twelve career appearances in the 3.Liga and forty two in the Regionalliga West, scoring four goals and registering six assists.

Ezeh caught the attention of Wehen Wiesbaden after some good performances for Viktoria Berlin in the 3.Liga in the second half of last season.

In his first words after the transfer was confirmed, Ezeh said : "I'm convinced that I can develop very well at SVWW. I can't wait to get to know my new team and be on the pitch with them."

Ezeh has been allocated the number 37 jersey for the forthcoming campaign.

He received three call-ups for Bundesliga matches during the 2020-2021 season but didn't make his senior debut for Schalke 04 as he was an unused substitute in all the games.