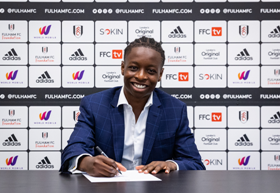 English Premier League new boys Fulham have announced their new intake of academy scholars, with a player of Nigerian descent part of the group.

Former Chelsea midfielder Chibby Nwoko and other new scholars for the 2022-2023 season signed their contracts on a special evening at Motspur Park.

The new deal signed by Nwoko will keep him at the Cottagers until at least June 30, 2024.

As per Premier League rules, all U17 players are required to start next season on a scholarship deal before they are permitted to sign their first professional contracts.

In his final season as a schoolboy, Nwoko was on the bench against Arsenal amd Stoke City in the U18 Premier League and Premier League Cup respectively.

Fulham U18 assistant head coach Andrew Joslin, giving a lowdown on Nwoko, said : "Chibby joined us from Chelsea at Under-12s and he's a central midfield player who has a good range of passing.

"He's joining the full-time programme and is someone who will be looking to make that transition into full-time football.

"We're looking forward to seeing how he develops across the next couple of seasons."

Idris Odutayo, Timmy Abraham and Michael Olakigbe were listed as Fulham Academy players last season, while Tosin Adarabioyo and Josh Onomah played for the senior side.