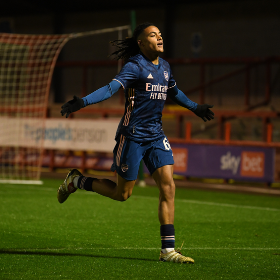 Manager Mikel Arteta has not selected Nigeria-eligible youngsters Zach Awe and Miguel Azeez to travel with the first team for their training camp at Adidassler Sportplatz in Herzogenaurach, Germany.

The two development squad players trained with the first team at London Colney before their trip to Germany.

Arsenal youth team expert Jeorge Bird has informed that central midfielder Azeez and central defender Awe are with the Arsenal U21s for their pre-season friendly against Woking tonight instead of being with the first-team in Germany.

Azeez, Hutchinson, Flores and Awe are with the U21s v Woking tonight instead of being with the first-team in Germany. Can understand Azeez not travelling if he might go on loan but a bit strange that Hutchinson and Flores aren’t involved.

He suggested that Azeez has not traveled with the first team because he might be heading out on loan before the summer. transfer window closes.

As for Awe, the chances of him making the traveling squad reduced after several first team players reported for pre-season training.

Azeez was not involved in Arsenal's 5-1 rout of Ipswich Town in a behind-closed-doors friendly at London Colney on Saturday, a game in which Awe played the entirety of the second half.

It is confirmed that goalkeeper Arthur Okonkwo was involved in Tuesday's training session in Germany.