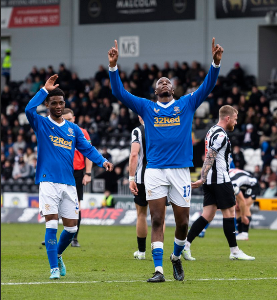 Allnigeriasoccer..com broke the news four days ago that the Saints have been genuinely working on a deal to sign the Glasgow Rangers midfielder in recent days and incoming head of first team recruitment Joe Shields has a big say in the proposed move.

This website reported on February 15 that the Light Blues were prepared to listen to offers for Aribo as from five million pounds in the summer and Romano has confirmed as much, stating that the deal is almost done for £6m (approximately N2.98 billion in Nigerian currency) plus add-ons to Rangers.

After Lavia, Southampton are also set to sign Joe Aribo. Been told deal is almost done for £6m plus add-ons to Rangers. No problem on player side, as was reported by @David_Ornstein. Incoming director Joe Shields, key for the move. ⚪️🔴 #SaintsFC

The former Charlton Athletic man has already agreed to join Southampton and an official confirmation of the deal is expected in the coming days.

Barring any unforeseen development, the likes of Nottingham Forest, Fulham and Crystal Palace will miss out in the race for the signature of the 25-year-old.

Aribo is departing Rangers after making 148 career appearances for the club, registering 26 goals and 25 assists and helping the Glasgow giants win the Scottish Premiership and Scottish Cup in his three seasons at the Ibrox Stadium.